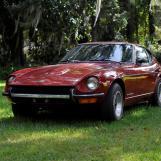 By Tweeds,
August 12 in Open Discussions